UFO:AI made the finals for Indie Game of the Year 2012

We made the top 100 games in IndieDB's Indie of the Year competition, which means we face off against the other 99 for another 10 days of voting to see who will get the top spots.

Thanks to everyone who voted for us. Please go and vote again in the final round.

We face some stiff competition this year, but a high placing in the finals will bring us lots of free publicity. So please spread the word.

November was a big month for the game's development. All the major pieces in the campaign rebalancing for 2.5 were completed and a load of new features, new items and new maps were added. If you're wondering what's coming in 2.5, head over to our forums where we've made a list of the major changes. Here's the run-down for November:

In total, 309 commits were made in UFO:AI repository in November.

Indie Game of the Year

Voting has begun for the Indie Game of the Year. IndieDB's yearly contest is one of the most widely watched competitions in the indie gaming world. A good showing will bring us lots of publicity, so please go and vote for us today.

Look for the banner just below the summary on our IndieDB profile to click and vote.

Pelya again updated our Android port. V2.5.0.07 fixes a lot of the recent problems and is now available at the Google Play page. There is also an updated Android package file available on Sourceforge.

Project of the month @ Sourceforge

Sourceforge has nominated us alongside eight other projects to be their Project of the Month for December. If we win we'll get a prominent link on their front page.

Vote today to help us attract more interest from players and developers. And spread the word so others will vote.

In total, 401 commits were made in UFO:AI repository in October.

We would just like to present you some of the work that is in progess:

We've implemented the long requested mission briefing window in a first step. You get a short introduction into the mission when it starts to load. We especially had problems in the past that people didn't know what to do on the fueldump map. It wasn't obvious to the player that one has to bomb the gate to get into the building. We will add new briefings for other missions in the future. This is also a nice way to set some more story elements into scene when the player can't do anything else then waiting (and reading).

We finally achieved a long term goal. All our data is properly licensed now. As you can see from the chart below, this represents nearly two years of work replacing old, unlicensed or poorly licensed files. We would like to thank all contributors for making this possible. The next step is to replace some files that are not approved by the Debian maintainers to get the game in the Linux distributions. We hope to get a good push in terms of users once we are available in the big distribution repositories. 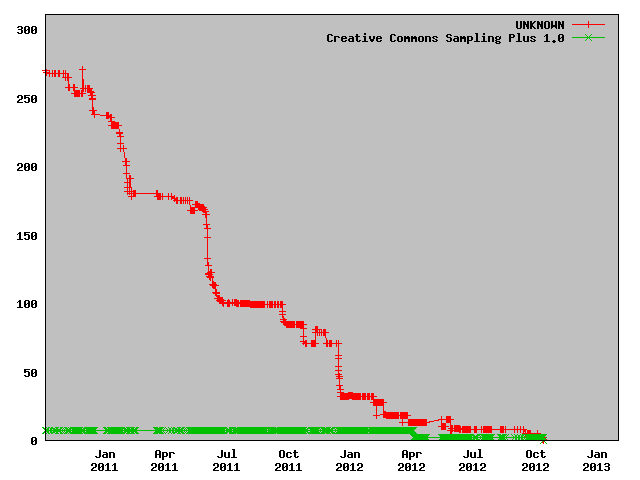 Thanks again for everyone involved in this process - and keep up the good work. And as everyone loves screenshots, here are some of the newer ones for your pleasure

In total, 157 commits were made in UFO:AI repository in September.

Gary Bonn has written a couple stories that take place in the UFO: Alien Invasion universe. Check out part 1 and part 2 of Alien Invasion and tell Gary thanks for spreading the word.

In total, 114 commits were made in UFO:AI repository in August.

Linux Game News chose UFO: Alien Invasion as the best open-source game in their turn-based strategy category. Linux users should check out the other winners for some good games in this under-served OS.

We had to switch to a new Sourceforge project structure because they don't support the classic projects anymore. This includes a change of our git repository URLs. So if you are compiling on your own and already have a clone of our repository just type the following to be able to get the latest changes again:

We've changed our translation system to not rely on the wiki anymore. All our texts are now in ufo script files. We are still using gettext. The only thing that changed is now, that you don't have to translate at two places anymore. You only have to translate the po file.

Earlier we were not able to say which po files were up-to-date with source text changes due to the nature of the msgids that we used in the po files (e.g. bloodspider_autopsy_txt instead the full source text). This has now changed and if we now change the source text, the translations are marked as fuzzy and you know which translations you have to review.

It's now also possible to provide different texts for mods. A mod can override a msgid with an own version of its ufo script file and is able to provide the English full text for any updated/new item in the game without the need to edit or add anything to the wiki.

The wiki itself is not yet updated for the new workflow. Expect this to be done soon.

What we now beg our translators for - please review the translations in the po files and check that they are up-to-date with the wiki. We will not sync anymore with the wiki - so everything you edit there is not in the game automatically. They will soon be set to read-only and stay there for a while for reference purposes.

In total, 205 commits were made in UFO:AI repository in July.

In total, 247 commits were made in UFO:AI repository in June.

In total, 363 commits were made in UFO:AI repository in May.

We've three new alien races in the game now. The Hovernet, the Combat Hovernet and the Combat Bloodspider. Furthermore we fixed some bugs in the battlescape AI which should make our aliens a lot smarter. Be prepared for a new challenge.

Along with these additions, we're working to overhaul our research tree, campaign progression and game balance. This means that there will soon be changes to when you will encounter new aliens, new weapons, new UFOs and new research items. A lot is staying the same, but when we're done we hope the game will play out a lot more smoothly.

The Ninex.info Server Team is once again in need of your help.

The server is currently hosting Two projects: "UFO: Alien Invasion," and "OpenXcom."
To continue providing hosting services we will need to raise funds for the coming year, to pay for both the service and possibly some new hardware, or a new server computer altogether, especially if such services are to be provided free of advertisements on the project websites.

In addition to the three projects mentioned, we also host additional programming and development tools for the community, including a snapshot autobuilder for OpenXcom, and a buildbot for UFO: Alien Invasion.
We also welcome new projects that are freely available and preferably open-source in nature, and hope to continue to provide tools for the community to grow, but we will need your help and support to do so.

Please consider a donation for our cause, which you can give via the following link:

We sincerely thank you for any support you provide.

One of our faithful users has written a review of almost 5000 words about the 2.3.1 version. Thanks a lot Ildamos. It's a nice addition to the "Let's Play UFO: Alien Invasion" that H-Hour posted yesterday and is worth a read.

Last month, two Youtube users created a series of Let's Play videos which show off our latest version, 2.4. We don't do a lot of promo around here, but these videos are a great way to get a taste of our gameplay.

A big thanks to Frontfox and Kelderan13 for putting these videos up!

After much work from Origin and others, we have finally merged the new soldier models into 2.5-dev! Check out the screenshots and download our latest nightly builds.

We finally assembled a dmg for our mac users. This is still the first working version without fink or macports required. If you encounter any problems with it, please let us know.

In total, 513 commits were made in UFO:AI repository in April.

With more than a dozen new maps and dramatic speed improvements behind the scenes, 2.4 is a major step forward in our quest to build a fully free and open source tactical squad shooter and earth survival strategy game.

In total, 434 commits were made in UFO:AI repository in March.

You can find updated debian/ubuntu/mint packages for i386 and x86_64 in our download section. Please report any problems to the proper topic in our forum.

We have begun preparing the release of UFO: Alien Invasion version 2.4 and we could use your help.

Please download the latest release candidate installer for Windows or Linux .deb packages for i386 or amd64 so you can help with testing, reporting bugs or making sure closed bug tickets are not still causing problems. Check the language files and send updates for confusing or inaccurate text.

We also have 18 unknown licensed files in our repository we hope to replace. If you can help us replace these files it would mark a major step forward in our quest to be fully FOSS-compatible.

Finally UFO: Alien Invasion got a own domain.
We migrated the project web page to http://ufoai.org
There is no need to change the old links you posted in our forum and on other web pages, old address are still working and are redirected to correct site.
We hope the new address will be easiest to remember.
Cheers

In total, 266 commits were made in UFO:AI repository in February.

In total, 251 commits were made in UFO:AI repository in January.

In total, 202 commits were made in UFO:AI repository in December.