From UFO:AI
< Mapping
Jump to navigation Jump to search

Map testing is a very important part in getting the maps usable. UFORadiant is not rendering every detail - and there's always human error factor. This article will try to help with in-game testing of maps and reporting the problems. Of course, you should have latest development version running - see compilation details. You can check the pathfinding data in UFORadiant now - to make this work you first have to compile your map and then use the button in the toolbar to show the pathfinding overlay.

You can either test and report new bugs found, or help with triage of already reported bugs. See tracker - select "Status" to be "open" and "Category" - "Maps", then take some reported bug and test it. Report your findings by commenting on the original bug.

Of course, map bugs can be found during normal gameplay - but dedicated testing usually will cover larger areas of the map and more maps, So there must be a way to load any arbitrary map. To load a map, open the game console with the `/~ key above your tabulator-key (or Shift ESC to get the console and ESC to return to the normal GUI). You may do it in game or from the main menu.

Type maplist to get a list of valid maps. Start the map by typing

for a static map or

Sometimes you will want to start a random map using specific tiles in specific locations, so that you can test the exact same layout. This will require specifying individual tiles and their positions (the following example is broken in two lines, use single line when entering a command).

Given that there currently is no way to paste commands in game console, typing such string can be very tedious. Fortunately, there's a solution - you can create aliases, which later can be executed ingame with a single command. To do this, you have at least 3 options:

Note that you must start a new single player game, build a base, hire and assign to the dropship a team of soldiers, otherwise the map will be loaded without actors and you will not be able to test it properly. You can also load a single player game.

The map will be loaded with the soldiers from your current game (those selected on the first dropship in the first base) with their current equipment. Aliens and civilians will be chosen from [?].

So, what and how should be tested? Before you start, it is desired to have a debug build and run the game in a debugger - that way you will be able to report crashes as well.

There are a lot of things that can go wrong with a map. After loading the map, look around it - check for incorrectly looking objects and shadows, check for incorrect textures. Switch levels, check that objects appear and disappear as expected. Walk around with soldiers, check that both pathline and actual walking are as expected. Ideally one would try to step on most tiles in a map, but remember that some problems show up only when longer pathline is displayed. Hover the mouse cursor over the tiles, select them as targets for walking - this also can expose different problems. Try to step into various objects, try to walk in unintended directions. In general, just try to break things :).

(this is not a valid definition). When reporting problems in such maps, copy and paste this string to your report.

If the problem is related to pathfinding, it can help to have routing information dumped to a file.
To obtain this information, load a map and execute debug_croute and debug_sroute.
This will create csv files in the current directory. Note that these files are fairly large, so you will want to compress them for adding to bugreports.

Wilminator has implemented an overlay of the pathfinding grid. It draws rectangles over tiles, depicting pathfinding related information using colours and shape of those rectangles.

To enable this overlay, enter debug_map 1 in the game console. Here's a screenshot of the result: 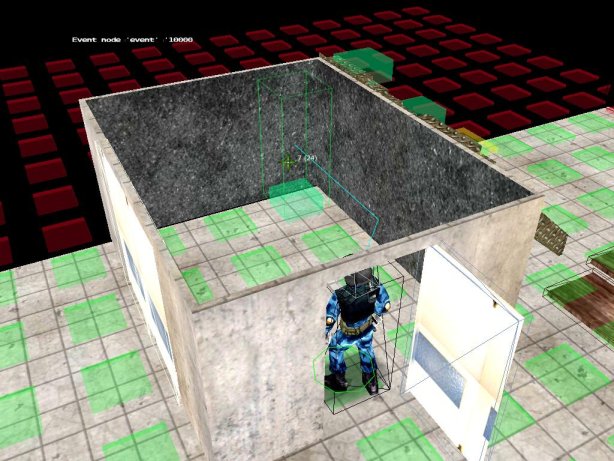 Based on pathfinding grid for Game Client, a rendering overlay for pathfinding was introduced into Radiant. It basically shows the same data as the Game Client by loading the data from bsp file. The overlay can be enabled by using the Tools>Show Pathfinding menu entry. Level filtering can be applied to these.

For each grid following details are rendered: