Commander, we've recovered a new UFO type which is now waiting in our hangar for disassembly. Going by the extremely heavy armament it seems to be some kind of heavy fighter or fire support model, its size class somewhere in between those of the UFOs we've observed so far.

This is the first alien craft we've seen that is unmistakably purpose-built for combat. What's even more disturbing is that it has certain features, innovations, which we theorise make the craft more suited for atmospheric flight. I think we need to have a look at this right away as it may represent a significant shift in alien goals and tactics.

We've dubbed this UFO the 'Gunboat', and the name tells you a great deal about its intended function. Its weapons and armour exceed that of UFOs twice its size. As near as we can tell it was designed for the role of heavy fighter/interceptor, and it fulfills that role magnificently.

The UFO is armed with two particle beam weapons as well as -- very interestingly -- two additional modular hardpoints of a design almost identical to the weapon hardpoints on our own aircraft. It seems like the aliens have actually adapted our design for their own use and may begin using different loadouts on individual craft. If the aliens are actually learning from us, we could be in for a hell of a ride . . .

Even more interesting is the Gunboat's armour, an improvement over the standard skin of alien materials we saw on the first wave of invading UFOs. This new armour is a composite layer-cake of alien materials and various other substances designed to slow and stop projectiles from penetrating. The basic principle is simple enough but the new compounds have interesting properties which we're not sure we fully understand. I'll see if my team can make anything of it and, if so, I'll have a new research proposal ready for you soon.

The fuselage design of the Gunboat is still ostensibly that of a spacecraft, but it has certain adaptations that make it much easier to handle in atmosphere. It has actual wing surface generating lift, unlike the small claw-winged designs which relied on brute engine power to stay airborne. Furthermore, mobile flaps on the wings and stabilisers -- much like on human aircraft -- allow the Gunboat to use the airflow over its surfaces, giving it a much tighter turning circle, a far higher angle of attack and a tremendous rate of climb compared to a UFO moving on engine power alone.

Overall the Gunboat is fast, manoeuvrable and utterly deadly. It seems to outperform previously-observed UFOs on every level; faster, tougher, better-armed and more nimble. The only positive is that it would take three or four times as much material to build a Gunboat compared to a small attack craft and twice as much fuel to keep it flying, so it's unlikely we'll see Gunboats in large numbers. My only worry is that they won't need very many of these to pound us into dust. Extreme caution is advised, Commander, and I recommend we spend some time and money upgrading our airfleet as soon as we can. 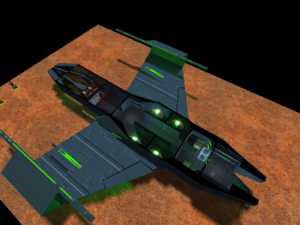