Commander, we've recovered a new UFO type which is now waiting in our hangar for disassembly. Recovering a Fighter-class UFO has been one of the things we at DivEngine have been praying for. This is the first armed combat UFO that PHALANX has observed; it is vital that we study these alien craft and weapons and learn their weaknesses, if they have any.

The Fighter craft seems to serve the role of escort to alien harvesting expeditions and similar operations. It is frequently deployed as a Harvester UFO's fighter wing, or even as a diversion to mask some other mission somewhere else.

It's not as manouverable as some UFOs we've observed, but it's certainly fast, with a tough airframe and large claw-like heat exchangers on the side to compensate for the increased heat output of the chunky antimatter engines. It mounts a single weapon system under the nose of the craft. This weapon, some type of high-energy particle beam, will require thorough research before we will be able to make any conclusions about it. However, it's obvious just from our combat recordings that this weapon is extremely dangerous. It fires a beam of particles at a good fraction of the speed of light, giving it significant range before the atmosphere can slow and/or disperse the particles enough to render them harmless.

The crew compartment is equipped with 3 duty stations. We have studied these intently and, as near as we can determine, they are designed a pilot, a gunner and an electronics officer. The Fighter features no discernible communications equipment, nor does it mount landing gear. What it does have, however, is a large targeting computer and holographic HUD to make the craft even more effective in air engagements.

Combined with our work on UFO theory, the analysis of the Fighter has led us to some new conclusions about these smaller classes of UFO. While faster than most things in Earth's sky, the Fighter is still not very speedy for a craft driven by antimatter rockets. From what we've seen of the alien hull materials, they could easily stand more engine stresses if required. The aliens could certainly build more powerful engines with their current technology. It seems the limiting factor is fuel volatility.

The antimatter tanks in the Fighter are very small and very heavily armoured. Obviously the aliens aren't taking any unnecessary risks. The few tenths of a gramme of antimatter that a small UFO can safely carry seem to be just enough to complete a planet mission and return to base. If the UFO does manage to lose containment, the amount of antimatter in its tanks will not be enough to harm other craft in the same formation. This might not be true for larger craft, however.

Tactically, the Fighter is a real threat to PHALANX craft. They most often operate in pairs, a lead craft and a wingman, forming a tight, effective formation to protect larger and more vulnerable craft. However, their function is strictly limited, as they aren't equipped to do anything more than armed reconnaissance. The real threat will always be whatever the Fighters are protecting. Fighters should never be a main target unless there is nothing else left to shoot down. 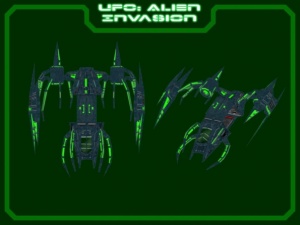