Commander, we've recovered a new UFO type which is now waiting in our hangar for disassembly. This is one of the largest UFOs we have observed so far, but the relatively light armament indicates that it's not a combat craft. Our preliminary walkabout of the interior has given us only tantalizing clues about its intended function.

A lot of the equipment is stuff we've seen before, containers geared towards storing live and dead biomass, but this UFO also has a lot of other kit that's leaving my team scratching their heads. There are mysterious alcoves with ports and valves leading to tanks full of human blood, with strange controls unlike anything we've seen from the aliens before. There are banks of robotic arms all ending in alien syringes, like some kind of mass inoculation centre -- and there's more that we can't even begin to describe. Just being inside it gives you a sense of something hostile to all human life.

I think we need to do some serious investigation on that thing right away, Commander. There's something very very wrong about it, and I'm not going to be able to sleep until I know what it is.

This UFO, which we've come to call the Corrupter, is a nightmare of alien medical technology. It makes only a few concessions to air combat. Its main purpose, without a shadow of a doubt, is to land on Earth and carry out hideous operations on human victims.

Where previous alien equipment seemed to focus mostly on collecting human biomass, the Corrupter's interior -- particularly the massive blood transfusion banks -- are geared towards the capture and alteration of complete, live human beings. The alcoves I mentioned in my proposal are still mysterious, but going by the wear patterns on the floors they seem to be used to store some kind of heavy alien robot or cargo equipped with tank treads. Heavy harnesses drop down from the ceiling to hold these robots in place during flight, and the alcoves seem to have some type of air-drop mechanism as well.

It's difficult to speculate exactly what exactly goes on in these UFOs with regards to captured civilians. Clearly it has something to do with the alien harvesting of human biomass, but they already have craft for that which do not appear to be in any way obsolete. Instead we have to suspect that the Corrupter represents a paradigm shift in alien activity on Earth. Something has changed. Until we fully understand what's happening, we need to prepare ourselves for what could be the worst threat to the global population we've ever seen.

In the air the Corrupter's performance is relatively poor, being slow and sluggish compared to other UFOs, but from our observations it appears to be heavily escorted and presents a major ground threat due to its large crew complement and on-board heavy weapons. More than any other craft we've encountered, the Corrupter is purpose-built to deliver large alien forces to the surface solely to attack civilians.

Commander, it's painfully obvious that we need to shoot these things down whenever and wherever we see them. If we don't, it's going to result in the wholesale slaughter of innocent people and possibly even scenes worse than Mumbai and Bonn.

We have to stop that from happening at all costs. 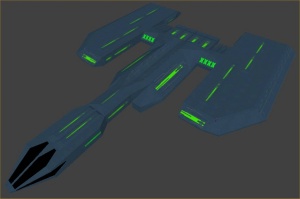