I'm very happy to report that the first production model of our next-generation interceptor has been completed and passed all of its flight tests with flying colours. At the risk of sounding boastful, it may be the finest piece of human technology ever produced.

The Stiletto is a single-seat air superiority fighter with VTOL (Vertical Take-Off and Landing) capability, allowing it to set down on tiny landing pads or in the middle of nowhere if necessary. Its huge, high-performance turbofans can turn 360 degrees for full manoeuvrability even at supersonic speeds. The giant engine intakes are protected by a sophisticated air channeling system that actively filters the air in front of the engine and redirects any piece of material large enough to harm the fan blades. They are more than powerful enough to lift the heavily-armoured fuselage and can hover unassisted for up to two hours before burning through all their fuel.

The helicopter-like design may not look very fast, but appearances can be deceiving. The Stiletto's compact airframe can survive anything up to Mach 2 for short periods of time; it has a cruising speed of Mach 1.3 and a max velocity of 2.1 on afterburners. These high marks put the Stiletto well ahead of many military jet fighters which do not have supercruise ability.

Once in the air, it can jump like a jackrabbit and is utterly ruthless in the hands of an experienced pilot. It can turn laterally around its hangar complex in six seconds whilst keeping its nose machine gun on the target at all times. It can flip end over end in point-three seconds and acquire missile lock on stealth aircraft before the turn is even complete.

Missiles are fitted on hardpoints mounted just under the outer winglets. The Stiletto also has powerful Electronic Warfare capabilities, with a state-of-the-art sensor suite contained inside the nose that includes -- but is not limited to -- several targeting lasers, a sophisticated radar system, and optical imaging as powerful as any spy satellite. Small ECM emitters placed in strategic points across the fuselage will throw off missile lock and can actively jam incoming radar. The weapon hardpoints can take a variety of armaments, and the electronics are fully modular to accept upgrades. Remember, however, that space in this craft is at a premium.

The powerful Volkot VO-36 engines consume a large amount of fuel, and the Stiletto's capacity is not large. Leaving enough fuel for interception, its maximum effective range is no greater than 2000 kilometres. However, within this radius, this craft is the master of all it surveys.

Please note that because of its exceptional performance this craft is not recommended for use by novice pilots. Its handling at low speeds has been described by our test crews as 'tricky'.

The Stiletto is ideal for short-range interception of hostile craft that threaten PHALANX bases or nearby civilian targets. It can go toe-to-toe with anything on Earth and it will win. However, the Stiletto can't be deployed against targets more distant than 2000 kilometres from its hangar as it won't have enough fuel for both attack manoeuvres and the flight back to base. Inflight refuelling may be considered to extend the combat radius, but will require additional development.

Performance against extraterrestrial craft can't be measured, of course, but the best we can do is the best we can do. If a real alien threat comes for us in our lifetimes and the Stiletto won't do the job, then the human race is in trouble.

Commander, I've just looked at these Stiletto-class ships on paper and in person, and they have blown my mind. It's hard to believe we built these little things in 2026 -- and that no one ever realised the kind of gold they held in their hands until now. What we have here is probably the most manoeuvrable aircraft ever built; it puts attack helicopters to shame and can turn circles around state-of-the-art jets. It does things most modern aircraft can't even dream of.

It's also a nightmare to fly due to its inherent instability, especially at speed. The original file badly underplays that part of the tech assessment. However, Commander al-Kuhar of the air wing insists that our pilots can handle it, and I think I believe him. Even better, we've managed to track down a complete intact specimen, and it's in the shop right now being restored to operation. I've given the go-ahead for a full refit and flight testing on my own authority.

This is simply the best knife-fighting aircraft I have ever laid eyes on. We're going to need it. 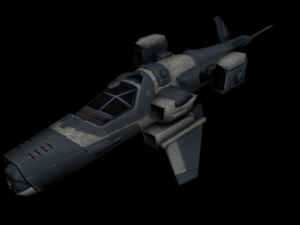