It is clear that the Stiletto-class Interceptor, while a terrific aircraft, does not cover all our needs. We must be ready to defend our planet and our people anywhere across the globe. The Stiletto's operational range is too limited and it is not fast enough to engage all the UFOs we might detect.

Only one aircraft in the world is capable of filling the operational gap we face; the Argentinian KB-550 Hypersonic Wing, dubbed the "Saracen" in NATO code. Mixing old and new stealth technology into a single airframe, the Saracen most resembles the ancient SR-71 "Blackbird" in its shape and bearing. It is black as the night itself, covered in radiation-absorbing paint that makes it practically invisible to radar, lidar and most other forms of active scanning. Its fuselage is composed almost entirely of carbon nanotubes and sheets of graphite-reinforced plastic. This makes the craft extremely strong and heat-resistant enough to cope with the temperatures of cruising at speeds in excess of Mach 4. The Saracen is the fastest military airplane still flying today.

In terms of its capabilities, the Saracen pushes our interception range into international territory. Its huge, armoured tanks and amazing fuel-efficiency allow it to go anywhere up to 10,000 kilometres from its hangar at hypersonic speeds -- and back again -- with fuel to spare for combat manoeuvres. Its stealthy design, high speed and tough airframe allow it to engage UFOs that our Stiletto-class Interceptors may simply be unable to catch. It has tough armour and can fly home even on one engine. Thanks to the power of its engines and a set of additional manoeuvring thrusters in its belly, it can take off almost vertically; this is definitely within the restrictions of our hangar facilities.

Its electronics suite is similarly impressive. It has state-of-the-art targeting computers, advanced radar and lidar systems, advanced ECM (Electronic Counter-Measures) equipment, in-helmet VR imaging for the pilot, and more. The Saracen can carry about twice the electronics load of a Stiletto-class Interceptor, with room to spare for further modular equipment.

Unfortunately, for all its strengths, it is costly to lease and maintain, and its heavy load of fuel and armour cuts badly into weapons capacity. The Saracen cannot equal the weapons load of the far smaller and less expensive Stiletto. Nor can it hope to equal the Stiletto's manoeuvrability. Despite thrust-vectoring technology (the ability to change the shape of its engine nozzles to direct thrust), electro-elastic wing surface (the ability to dynamically change the shape of its wings) and other terrific advances, the Saracen is still a large fixed-wing aircraft with all the limitations that implies. Though it can take much more damage than a Stiletto and remain effective, the Saracen will not perform as well in combat with alien craft.

At its heart the Saracen is a long-range interceptor to be used against extremely distant or fast UFOs. Unlike the alien craft, it is barely slowed by moving inside Earth atmosphere, making it slightly faster than most of the UFOs we have observed so far. This will allow PHALANX to catch the aliens wherever they may be going -- short of interplanetary space.

As always, the Saracen's performance against extraterrestrial craft can't be measured without solid observational data from at least one real combat encounter. However, if deployed in large enough flights, it should be able to cut up alien craft of all varieties. 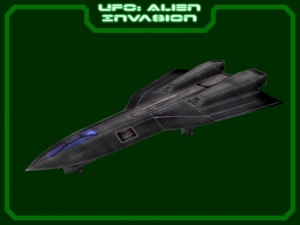