Commander, let me preface this by saying it's obvious that the aliens have been severely outperforming us in every way, but nowhere is this more evident than in the air. We were in a bad position at the start of the war and despite our efforts there has been little improvement.

However, now that we have an understanding of alien materials and how they behave in the air, as well as alien engines and fuelling systems, I think my team and I are ready to tackle the task of creating an entirely new interceptor exclusive to PHALANX. We believe that by combining alien techniques with good old human manufacturing we can design something that will be vastly superior to our current-generation craft while remaining economically feasible to produce and to fly.

The program will incur considerable expenses in lab time, personnel and materials, but as always we stand to gain much more than we could possibly lose. It's a project that could rally a lot of hope for our cause, Commander. Please let me know as soon as possible when you want us to start work.

Commander, I'm extremely proud to present you with the plans for our new interceptor, the Dragon. As you can see we've taken more than one page out of the aliens' book and the radical styling truly pays off.

Incorporating new technologies from the ground up, the Dragon consists of an inner skeleton of alien materials providing strength for the lighter outer skin of carbon nanotube-reinforced plastics. This allows it to mount two actual alien engines which give speed and power like nothing else in our arsenal. The forward-swept wings are a special touch to allow it more knife-fighting mobility than alien designs.

The three-pronged fuselage is also inspired by the enemy, slicing through the air with remarkable grace. The upper two prongs can mount small retractable weapons, the bottom prong contains a medium-sized weapon compartment, and the central structure was designed to accommodate the main hardpoint -- the 'mouth', if you will -- for which the Dragon was named.

The main drawback of the Dragon is that, like UFOs, it requires antimatter to get into the air. Nothing else will do considering the weight of the fuselage. Since our supplies of antimatter are so limited it may be that we can't afford to spend it on anything but our airfleet. That's why we should be careful about where we deploy the Dragon, and consider whether or not its deployment is really necessary in any given situation.

Also, please note that while the Dragon is technically capable of entering orbit on its own steam, it has no space capabilities and should not be pushed above the upper atmosphere under any circumstances. Some things are just too much to ask right now. We're engineers, Commander, not wizards. 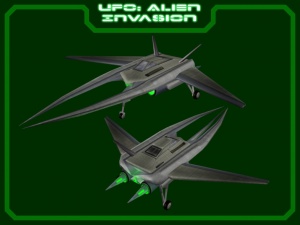