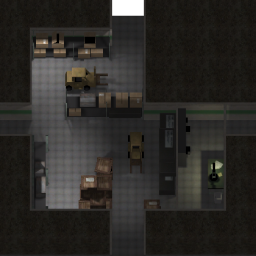 The Storage facility is the base's repository for ammunition, weapons, and other equipment not currently in use. All small-arms, vehicle and aircraft ammunition that is not earmarked for emergency response resides in the Storage facility. It also serves as a garage for our battlefield vehicles. These remain in their bays until mission time, with fully-loaded magazines in case of a base attack.

Cameras and alarms maintain round-the-clock vigilance to ensure no unauthorised removals are made. All removals must be approved by the officer on duty before the alarm is deactivated. Live ammunition and other sensitive equipment such as alien artifacts are kept in locked containers in the quartermaster's office behind rigorous security; checking anything out of locked storage requires the presence of the base quartermaster and written authorisation from the Command Centre.

All item requisitions necessary for research, production and aircraft maintenance are handled by the appropriate officers; no input from the Base Commander is required. Only mission equipment and battlefield vehicles require the Commander's direct supervision.

The Storage facility can fit a maximum of 50 standard-sized pallets of equipment. The amount of items in a pallet is relatively unimportant, size is the main restricting factor with regards to Storage facility space. The contents of each individual pallet are scrupulously tracked by magnetic labels and detailed punch-card logs.

It does not depend upon any other base facilities to function.

In the case of an invasion, we will need all the storage space we can get. Large stores of ammunition may need to be squared away for long periods of time. Recovered artifacts will need to be adequately contained and protected, as anything with nebulous alien capabilities should be kept in our explosion-proof lockers or be destroyed. If all the lockers are full, we may have no choice in the matter.

During a base attack, the Storage facility would not be more than a target of opportunity. Any sensitive equipment in the facility will most likely be protected and require significant effort to destroy. Even the facility itself is cheap and easy to repair. The only threat comes from stored explosives and ammunition, which may present a risk due to the possibility of sympathetic detonation.

Still, any extraterrestrials are unlikely to spend the time and effort getting into our explosion-proof lockers when there are easier targets nearby.