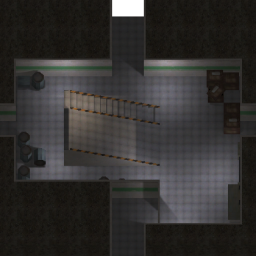 The Base Entrance is the first structure built at any new PHALANX location. It is the primary -- and sometimes only -- way for equipment and personnel to enter the base. It consists of a vehicle ramp and a stairway that allow easy movement between base and surface. A small, camouflaged gatehouse is built on top for security and will also hide the entrance from flyovers. Like all our surface installations, it is coated with radar- and infrared-absorbing paints to reduce the chance of detection.

By its very nature, the Entrance is one of the most vulnerable facilities in any base. Hostile extraterrestrials will almost certainly attempt to gain access here. It is one of the focal points for the defence of a base, and should be placed at a considered distance to the Command Centre so that on-duty soldiers can respond to an attack with utmost alacrity without putting the CC at risk.

On its own the Entrance facility has little tactical value. It can be assumed that any EXTs will merely try to hold the Entrance and choose more tempting targets to actually assault, since the Entrance usually contains nothing volatile and it has no areas that are particularly sensitive to destruction. Having no advanced equipment or components, it is also quick and cheap to repair. If damaged, other structures can temporarily take over the Entrance's functions without significantly impeding base operation.