ShipIt has managed to build one of the largest maps ever produced for UFO:AI. Large maps are great. Personally, I feel the average UFO:AI map is too small. But large maps bring their own problems -- both technical problems and gameplay difficulties.

This tutorial looks at the overall structure of ShipIt's Mansion map while it is still in progress, to describe some of the gameplay issues that arise. It will not address the technical issues.

A big thanks to ShipIt for volunteering to have his map scrutinized this way. I chose the map because it offers an opportunity to praise many of its great elements and illustrate some of the concepts that I think can improve many maps.

What follows is purely my opinion and offered for discussion.

Mansion is a great map that has done a lot of things right:

But because it is so large, it runs certain risks that other maps don't:

Let's look at an overhead view of the map. 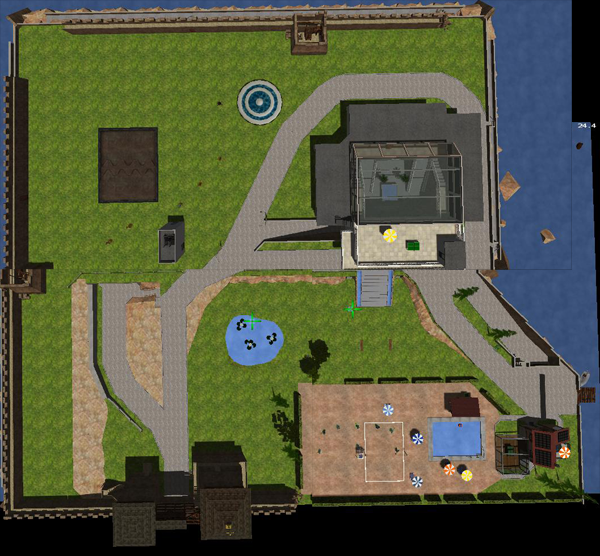 Those tiny dots in the southeast are the soldiers. One of the first problems large maps face is the weapon range scale. The game does not use realistic scales. A real-life sniper rifle can fire up to a mile and it would take a lot of turns for the player to walk his soldiers that far. The game uses a semi-realistic visual representation of space but a very condensed tactical space. Weapon ranges, player movement and eventually visibility, all take place across much shorter distances than in real life.

As a result, the game must have a higher-than-normal level of "cover density". I use this word to indicate the availability of tiles a soldier can stand on that hide him partially or completely from threats in a certain direction. This is an abstract way of saying boxes and walls to hide behind. But it can be created in many ways: cliff edges, sloped terrain, etc.

The following image is a rough visualization of the map's "cover density". The blue-green represents things that can provide some kind of cover. Green is the soldier start. Red is the alien start/UFO. 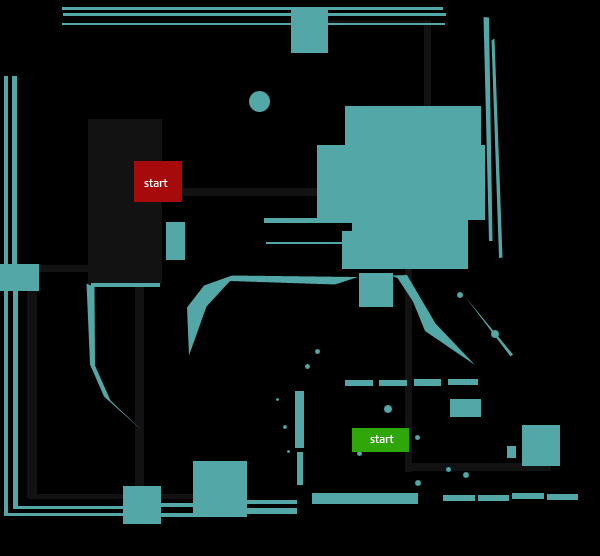 We can see from this outline that the right and bottom of the map have a lot of "cover density". There are many positions from which the player can move and shoot behind cover. A smart player will be able to use the environment in the bottom right to his advantage, while using a diverse range of weapon skills -- long, medium and short distance. Long guns can cover the short guns as they breach and clear buildings. What makes this area so good is that there is a mixture of exposed and unexposed areas. The player has different problems to solve and is rewarded for understanding and employing multiple strategies.

Now we can use this outline to get a sense of what options the player faces for fire and movement within the map. 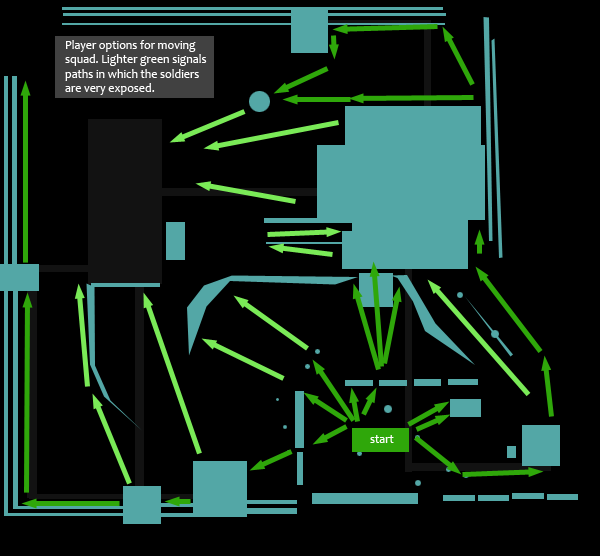 This overhead scheme does not do a good job of representing the long distances this map forces the player to move and fire across. While the southeast of the map has a lot of shorter arrows, most of the map has much longer distances which must either be crossed in the open or fired across. As a result, much of the map is sniper's territory. But because even our sniper rifles are not that accurate, much of the map will become a frustrating sniper battle, shooting back and forth but hitting little, as the aliens advance on the player across open space.

Having a long shot from time to time is not bad. A good sniper shot is a satisfying thing. But it is a good idea to limit the effectiveness of a long shot because the player will always be much better at taking advantage of this than the AI. The player understands cover and how to draw the AI in. That's why long shots should usually take place along narrow channels where the player may see an alien or two, but should not be able to catch most or all of the aliens in the map in his trap. 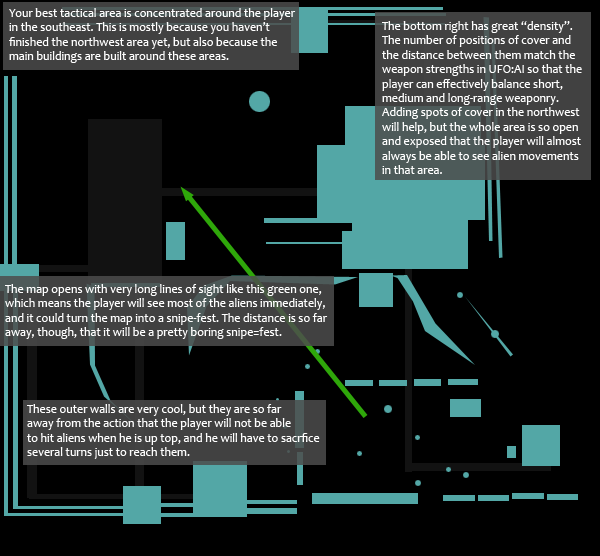 The following image outlines the recommendations I would make. The overall goal is to reduce the open space in the west and northwest of the map, and reduce the potential for the map to revolve around one kind of battle: the long shot.

Also, the map has pushed all of its most interesting elements to the edges: the castle walls, the mansion and the poolhouse. By re-orienting the map along a more north-south axis and putting in an extra wall in the middle, many of these elements take on a more central role in the map's tactical layout. 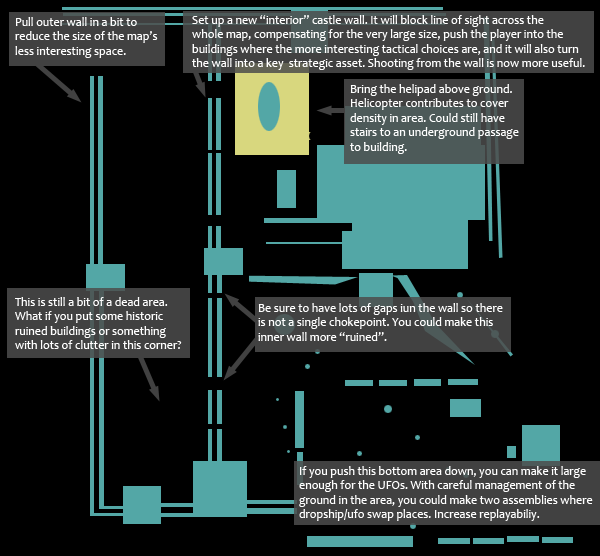