What follows is a technical description of how the pathfinding code deals with stairs and other vertical obstacles. Most mappers will not need to know the full details. If you want the player to go up stairs or over other obstacles, it's a good rule of thumb to keep the vertical change around 8 units (the height of an average stair). If you're using a non-standard height or want to implement something other than normal stairs, you may need to read the following.

With 2.3, a new tracing system is being implemented to provide better realism in regards to solid surfaces. This change has brought about a change in how stepup is handled. 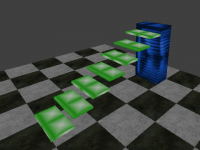 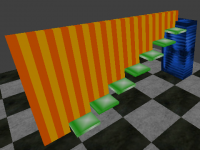 There is no longer a STEPUP brush. As of 2.3, all actors have an stepup of 8 model units. However, to compensate for slopes and ladders or stairs with many steps between cells, a new "microstep" tracing system has been added. If the difference in cell heights between two cells exceeds 8 model units, the path traveled between the cells is traced in 8 "microsteps". If none of these microsteps exceed the actor's stepup, the actor is then allowed to travel up the incline. 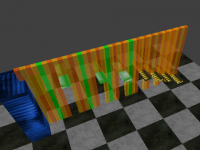 Additionally, microstep tracing does not require the slope to be consistent between cells, and even will allow for a couple traces to be lower than the the previous without penalty. This number of microsteps is marked by the PATHFINDING_MICROSTEP_SKIP define in shared/defines.h. Currently, up to two microstep traces may miss a platform that could be stood upon and an actor will be able to use the step found on the third.

Note that the green bars mark the third trace, which must be to a reasonable floor or the gap is too far and the actor can possibly fall. 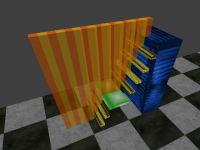 The new stepup system has one major limitation and rule of thumb: An actor cannot rise or descend more than one cell level per cell movement, even if the slope would allow. Coincidentally, the current actor stepup * the number of traces is 64, or one cell's full height. However, the actor can be given a different stepup if desired; the actor will not be able to rise or descend more than one level per cell movement.

It does not look pretty, but it is functional. Refer to the actor clip image below for ideas to make stairs look nice. 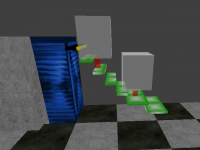 Visual of traces used to determine if an actor can occupy a cell with a likely map flaw. 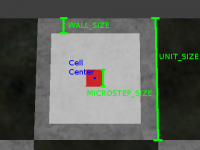 Top-down view of a cell and an actor's bounds, with size markers.

There is one more consideration: foot room. A place for your actors to place their feet when they stand in a cell. They stand on a 4x4 (model unit) square in the middle of their current cell. But there's two requirements for the space to be valid:

1. The 4x4 space must not be obstructed up to PATHFINDING_MIN_STEPUP tall (currently 8 model units) for actor leg room, and 2. The 22x22 wide space on top of the above volume up to the ceiling for the actor's torso, arms, and head. This unfortunately means that if we place our steps too tall and too close together, the floor trace will not let us stand on the spot because the actor's body does not fit. The three choices are to increase MIN_STEPUP, increase WALL_SIZE (the thickness a wall may enter a cell without causing it to become obstructed), or space out the steps a bit. Currently, the magic ratio is (11-2)/8, or roughly 9 units horizontally per 8 units vertically (about 45 degrees).

Keep in mind that those measures are taken with a 4x4 trace. Moving the whole staircase a tad sideways can sometimes have a large effect on the heights measured.