From UFO:AI
< Manual‎ | Singleplayer
Jump to navigation Jump to search

Every character model has a field of vision that is basically described by a cone shape in front of him. The character can see anything within a 45 degree angle compared to the direction he is facing.

In the example below the indicated soldier is facing in the direction of the yellow arrow. He can see both aliens (red circles) as they are within his field of vision. He may not see anything that is in the stable (the cow) on the left side of the screen. 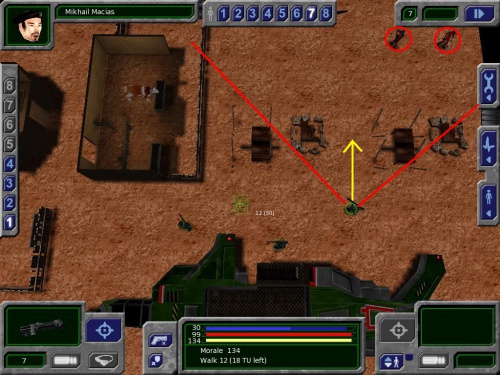 The field of vision for the left soldier is constricted as the stable walls block a large part. He is able to see the cow but not the aliens. Notice that the feeder and the fence do not block his vision as they are not high enough. 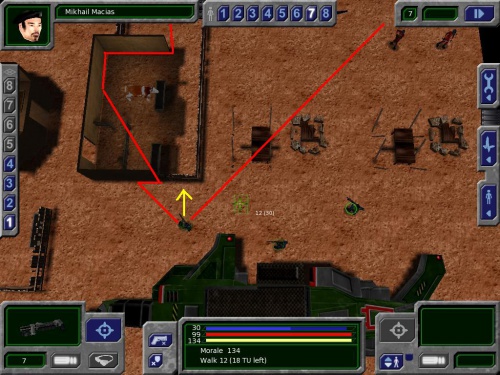 To spot an enemy a character has to have line of sight (LOS) to that enemy. That means it must be possible to trace a line from your character model to the enemy, which is not blocked by solid objects (i.e. wall). The enemy must not be completely visible to spot him, if a LOS can be traced to any part of the enemies model, this enemy will be seen.

You characters will spot anything even when moving. If at any point of your move your soldier spots an enemy that was unseen before, his action will be interrupted and you will be informed. During your turn the program will remember the enemies you have spotted even if you move your characters to new positions where they would not be able to see the enemy any more.

And remember: It’s easier to kill, what you can see!