Generic information about the AI

The AI is a score maximization algorithm that performs a depth-first complete search over the tree of possible actions. There's a catch here ofc, it doesn't calculate the entire set of possible gamestates (that'd be a whole lot larger than the chess tree), it just takes turns for each of it's actors and creates/searches/executes a tree for all possible moves only for this turn. Given that the outcome of a shot is non-deterministic (we can't know it's result prior to taking it), the scoring algorithm evaluates damage dealt with some human-like metrics: 'is it worth it?' etc. A whole series of other metrics like 'did I get to hide well enough?' are also added ontop of the possible damage metric to give us the final score for each of the tree's leafs.

In this topic, we're discussing the default C-based AI used by default in the game. There is also a LUA-AI that has some support, but it is not yet considered functional.

Here are the basic 'cheats' that the current AI employs in order to give it some boost in performance:

Here we will take a look to the core AI functions, all included in src/game/g_ai.c The diagrams are also available as an ArgoUML project file in the contrib folder of the svn. You can spot the keyword 'IMMEDIATE' in some parts of the AI. This is done to differentiate between the thinking part and the execution part of the algorithm. We will only be referring to sane alien behaviour here, leaving insane&civilian units out of the picture.

This is the main entry point for the AI, called once for each Server Frame (function immediately exits for all but %10 Server Frames). All that happens here is getting to call AI_ActorThink() for each of the actors of the currently moving ai team.

This can be considered the main AI function for every actor. 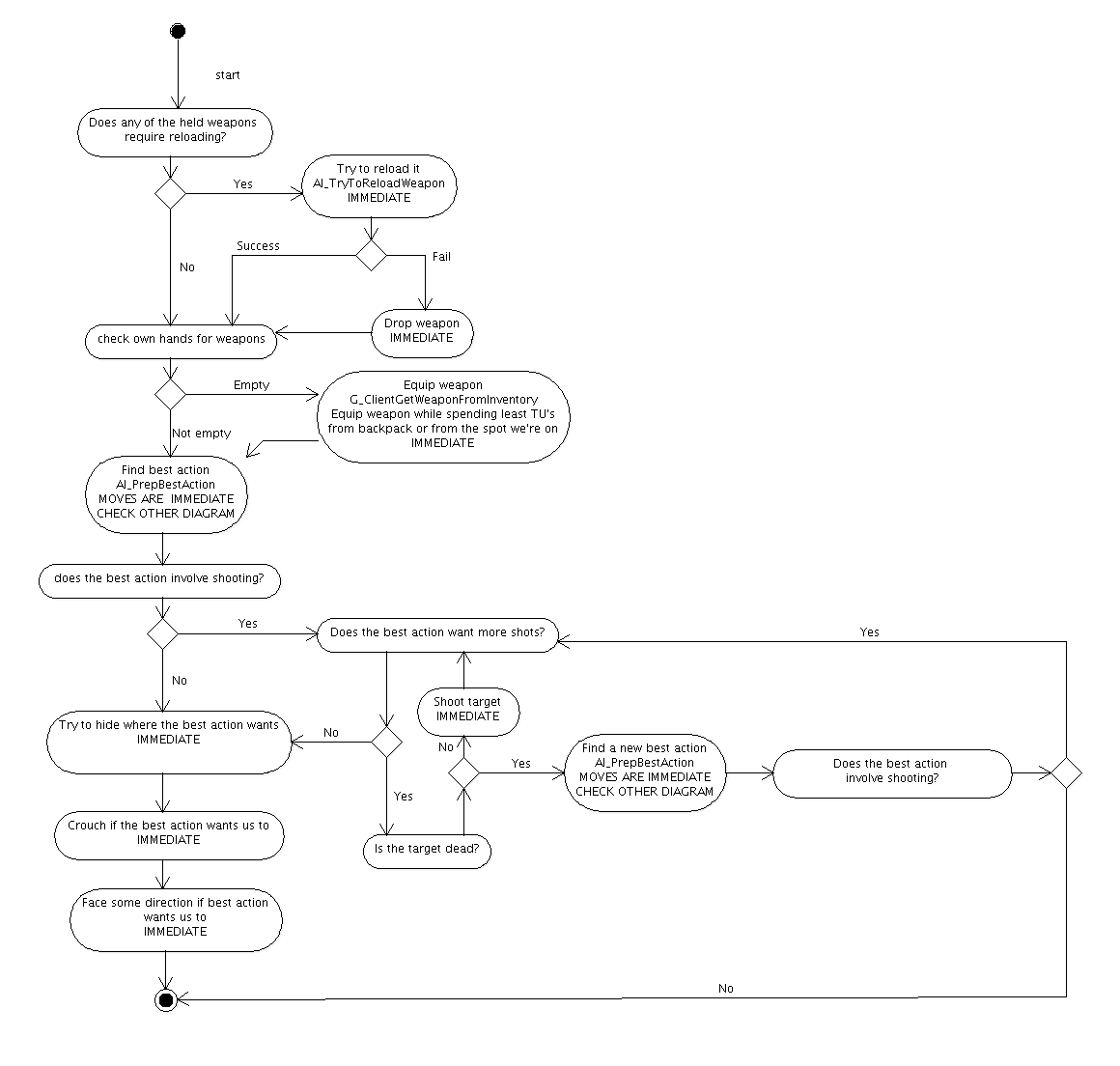 The main reason of existence for this function is the execution of the shooting & final hiding parts of the best found action. When AI_PrepBestAction has returned, the actor has already moved to a shooting position if needed. The diagram is pretty self-explanatory.

This part of the code calculates all the possible moving positions for the actor and requests the scoring of what can happen from that position. It finds the best (by score) spot to move to with it's resulting actionSet (like move there, shoot that, then move over there) and executes only the moving part. 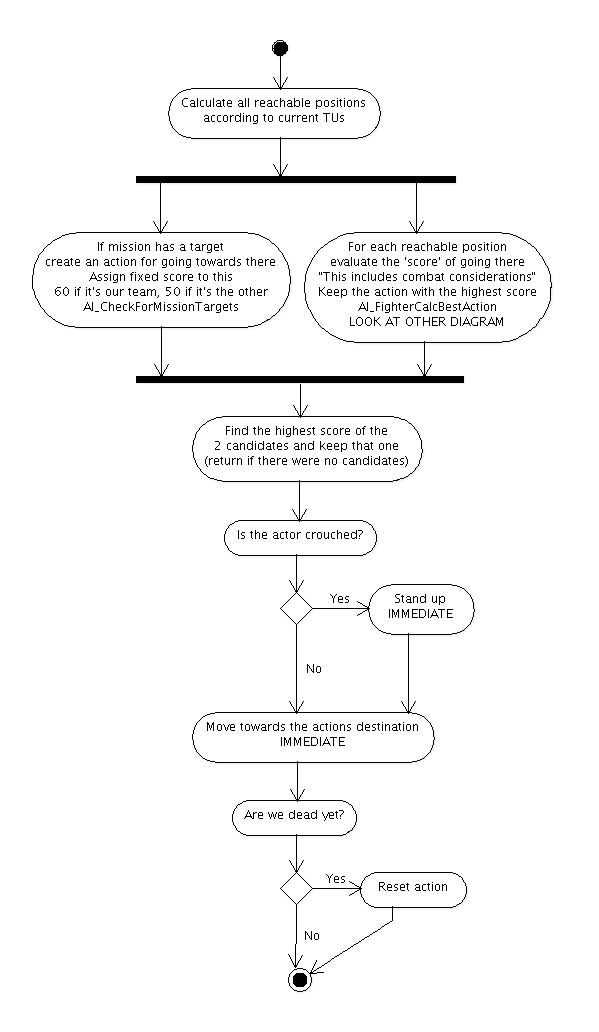 Pretty clear-cut I believe. Notice the dual-path of scoring. I believe the right one is the traditional one and the left one was added for supporting mission targets. Do we even have mission targets in the game? At least we got support for those ;)

This function is called once for every possible spot each actor can move to. At the search tree we're at the last level of nodes before the leaves start. The whole goal of this function is to find what's best to do from a position. This usually entails shooting someone, but it may end up being just a nice hiding spot. All of the action completion and scoring happens here aswell. 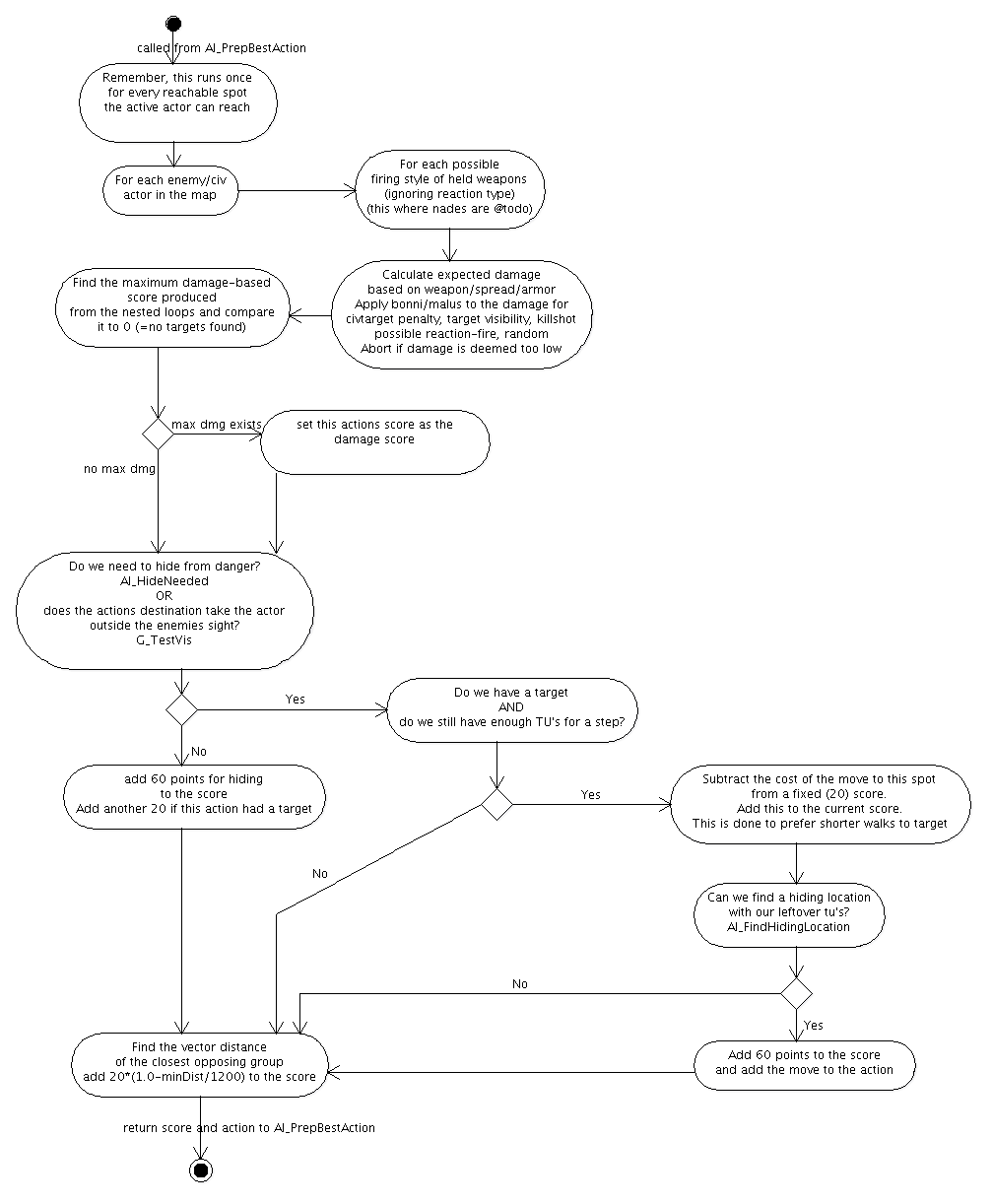 This is where it gets kinda complicated. Don't get confused at the 2nd level of cute baloons. I didn't know how to depict this properly without creating a huge diagram. I'm only trying to depict a set of nested while's there. It essentially says foreach_possible_target{foreach_possibly_firestyle{calculate_damage}} to find the maximum damage possible. So, we can see that the basis and first hint at the scoring system is the possible damage dealt. After applying some of the bonii/malus to the damage expected, we have a semi-complete action (up to now it only had a moving part from prepBestAction) and it's basic scoring. I say semi-complete because we may end up adding more moving to it by the end of this function. After this we start adding/subtracting scores according to some principles we make our fluffy little aliens like: hide, hide, hide and then try to close in the distance.

Values that heavily impact the AI

src/game/g_ai.h contains a set of #def's that start with 'GUETE'. These heavily influence the score each leaf of the tree receives, and thus the preferred action. The rest of the #def's are also included in the calculations, but have a much smaller impact.

This wiki page is a short version of the first post of the following thread: http://ufoai.ninex.info/forum/index.php?topic=5056.0 All questions, notes, requests and general information can be forwarded there.

The AI is currently being reviewed and expanded wherever possible. The following page contains notes on the updates of the development trunk: Combat AI development