The skin script allow to describe skins the engine will use for actor models (at the moment, only for human skins). It is not used for the gameplay, but only for the look and feel.

Model file embed a list of skin name. The engine only use the first one to find image file name. Others are not used, but can be, anyway, useful for third party model viewers and editors. The engine

Each skin is describe with the keyword actorskin. It contain a string id (used to find image file name), a name (displayed in the user interface) which is translatable, and some properties.

This example register a foo skin to the game. The game will search for skins using _foo suffix. This skin is available in both multiplayer and singleplayer game.

The engine use three things to found the file name used for a skin.

For example: It exists a model called body.md2. It embedded the skin file name body. And it exists an actor skin name called forest. The engine will check the image filename body_forest. If this image do not exists, the engine will use the default skin name.

The engine use the first embedded skin from models. It is a special case cause here - it doesn't use any suffix. To avoid loading error, the engine must read this skin entry on first, and this skin must be called default.

It is anyway an artificial order limitation. We should fix it with code. Patch is welcome. 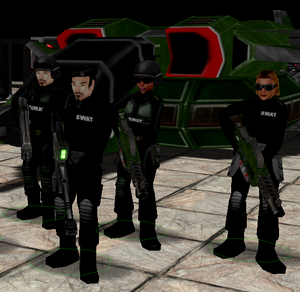 We can share an own actor skin with a pk3 file. You can check http://mattn.ninex.info/files/eliteskin_turkana.pk3 for an example of skin.

The game engine only share numerical skin id, and not named skin id. If a player use a custom actor skin, we don't know if other people will see the same model. Anyway the player himself will see the right model. Patch is welcome.