From UFO:AI
(Redirected from Base Facilities/Radar)
Jump to:navigation, search 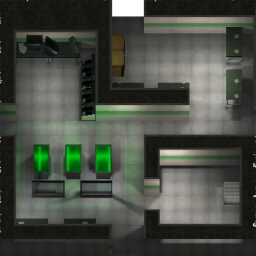 Commander, we've had to make extensive changes to our old Radar facility designs to bring them up to date. The old report is no longer applicable, so I've decided to replace it with this one.

Our Radar facility is not a large radar array in itself. It's actually a control centre for a series of camouflaged dishes placed on high ground around the base. There are between 8 and 12 dishes set up for each installation, depending on the available space and the dishes' individual coverage. Each dish is equipped with several means of detection rather than simply radar, as radar has trouble maintaining a lock on alien contacts. Supplemental systems include, but are not limited to, infrared and laser rangefinding.

The facility is manned round-the-clock in 6-hour shifts, reviewing the processed data after our computers have gathered all discernible information from a contact. Human operators are absolutely necessary and should be present to supervise at all times; what the computers might dismiss as a radar ghost can turn out to be a stealthed alien harvester ready to hit a mass of civilians. Instinct and experience count just as much as software intelligence.

Building more than one Radar installation at a base will not increase the extent of our radar coverage. A single facility will cover its full range as effectively as possible, and the only way to increase performance and range is to upgrade our systems with future technology or to build further installations outside the base.

Our radar is patched directly into the UN aircraft registry and can cross-reference the transponder data of any civilian aircraft with its flight plan and cargo manifest. Non-PHALANX military aircraft are also required to log their routes into our database, but we can't know for certain if the various militaries will be very conscientious in following that directive.

The Radar facility cannot function without a working Power Plant or a Command Centre to coordinate our radar into our tactical efforts.

Since our radar-emitting dishes are not located at the base site, there is no direct threat of discovery to a base from using active radar. Considering the number of other military radar sources around, it's unlikely that alien craft will be able to learn anything from a dedicated backtrace. At most they'll be able to find the general area of a base.

However, any UFOs spotted patrolling the area may be trying to zero in on our installation, and should not be allowed to complete their mission under any circumstances.

During an attack, the Radar facility will be at high risk. It is our eyes and ears. Without working radar coverage, we wouldn't be able to see the UFOs we're supposed to respond to. If any attacking aliens approach the facility they will almost certainly attempt to damage or destroy it with explosives. We must not let that happen.

We should not consider the Radar facility to be an end-all solution to UFO detection. Even with supplemental systems our coverage is not fully reliable, and we should research ways to improve our detection technology if we're to have any chance of stopping the bastards.