From UFO:AI
(Redirected from Base Facilities/Command Center)
Jump to navigation Jump to search 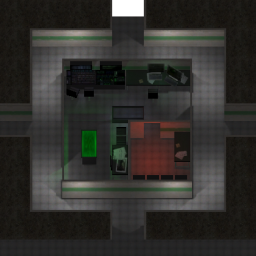 To any noble personages reading this report -- yeah, right -- I should warn you that I'm somewhat drunk and am dictating the last of my paperwork before they close the base down forever. And I'll probably be long-dead before anyone digs up any info about this old project, so I can't get in trouble for whatever I say here. Just for the record, the bastarding SecDef can get buggered with a chainsaw. 'Budget cuts' my ass.

Anyway, we've made some upgrades to the CC lately, so I've got to submit a new report.

The Command Centre is the nerve centre of any PHALANX base. It coordinates all base activity from research to engineering, it gathers and interprets data from our radar installations, it serves as a war room for mission planning, and it is the C3 (Command/Control/Communications) hub that launches and directs our air-to-air interceptions. A base can still operate without a functional Command Centre, but it would be blind, deaf and dumb; our interceptors couldn't even launch for lack of traffic control.

The CC is packed floor to ceiling with a brand new H-9000 mainframe and state-of-the-art communications gear, all of which is being ripped out by a gang of jackhammer-equipped thugs even as we speak. This equipment can't function without a power plant to supply it with enough electricity.

In my experience, most of the command staff actually lives in the CC, but I'm told that lower-ranking individuals do get to see their bunks once every few days. Speaking for myself, though, that's anecdotal evidence at best.

In the unlikely event that this type of installation is ever built again, keep it supplied with enough power to run it properly, and place it in a well-protected spot some distance from the entrance and hangars. If a base does get attacked, defending the CC should be a top priority, because without it we will be unable to put up any kind of effective fight until it can be repaired.

The old CC blueprints have been updated by our engineers to replace the ancient H-9000 mainframe and terminals with up-to-date holo-workstations and a fresh supercomputer installation. All other components are still viable and effective.