From UFO:AI
(Redirected from UFO/Scout)
Jump to navigation Jump to search
The printable version is no longer supported and may have rendering errors. Please update your browser bookmarks and please use the default browser print function instead.

Commander, we've recovered a new UFO type which is now waiting in our hangar for disassembly. We're ready to start studying and dismantling the craft whenever you say, but we will need some lab time and funding to make a proper assessment of its function and capabilities.

This small UFO is the first type we've observed visually and on radar. Although they don't seem to take part in actual raids, they're no less a threat; so far they've paved the way for every instance of alien activity on Earth.

We have dubbed this class of UFO the 'Scout', as that seems to be its purpose here on Earth. It makes sense. Every modern military force needs intelligence more than anything.

Here are the major technical details:

-- The craft has only a small fuel tank and few provisions for a crew. It seems designed for little more than coming down from orbit, flying around a bit, and then returning.

-- We've found no evidence of landing gear or hover ability in this craft, implying that it isn't meant to land. If it loses both engines, it goes down and won't come back up.

-- We have determined the craft to be unarmed, but it's equipped with what appears to be a large suite of sensors contained in the four protrusions around the cockpit. Curiously, it seems to mount no communications equipment that we can identify, which would defeat the purpose of a scout. Your guess is as good as ours, sir.

Beyond that the craft has no particular distinguishing characteristics.

As I said, this UFO type is used primarily as a reconnaissance unit and vanguard to scout the way for heavier craft. Though unarmed, we should shoot these things down whenever we're not otherwise engaged, because anything the aliens are up to is bound to be bad for us. 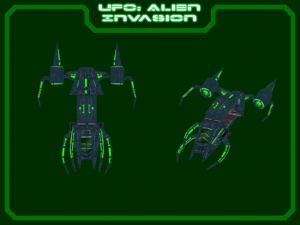