Hacked off the first round of brainstorm due to refinement and inclusion in main article. --Wanderer 05:36, 13 May 2007 (CEST)

Instead of actually zoning the geoscape into regions, I had a brainstorm I'm not sure of it's feasibility. If you put 'Location Markers' on the map, say, center of Antarctica, Eastern Europe, Western Europe, North/South America, so on, and then when a mission occurs use whichever marker is closest as an indicator. Associate each map or random build with a point of origin, and when a mission occurs near that PoO, it can read through the list and find the correct map.

The nice part about this is you could be as specific or generic as you want. Surround New York City, London, Paris, whatnot with more generic 'Woodlands', 'Farmland' markers. Use a Marker type once or many times, to help control more specific areas. --Wanderer 18:46, 11 May 2007 (CEST)

It's probably easier to do it that way from an implementation point of view, but I think it might be hard to define specific areas that way because it's hard to tell exactly when one marker takes priority over another marker. For example, take the Sahara desert. Missions inside of it should be desert-themed, but missions outside of it should not. Using markers, it's going to be a very hard job to get the desired behavior because the Sahara desert isn't shaped very conveniently.

This is definately different then what I remember discussing as being the selector. At early game this modifier isn't enough to even move the CategoryInterest (CurrentInterest of 50, say, so we're looking at ~7 * .0-.5, an average difference of around 1.5-2.), and in late game still not really much to move it (CI 1000 = 100 * .0-.5, average .25, 25 points). There is almost no variability in this functionality for the selector. Especially when you consider according to the older selectivity method, you'd need, at 1000 CategoryInterest, a 100 point gap for a mission for it to have 10% selectivity.

I know you'd like a more effective way of selecting off the mission list to weight it at the top, but (CategoryInterest * RAND() ) still seems like the most effective way to go. If you really want to weight it, how about a function like:

Good, I like the 0.85 too. That eases that. What I was mentioning in the end was regarding the 'selection value' climb in the CategoryMission files. In the original method, I was expecting the 'most recently available' mission to have about a 15% selectivity rate, somewhere between 10-20%, anyway. So, at 10 Interest, it'd only be 2 selections wide. At 100 Interest, however, it'd be 15-20 points wide. With this weighting method, to make sure we can clear the lower bound of the uppermost mission so at least in the top 25% of selection we'd have two that would be chosen from, we'll have to tighten this range, and perhaps mix up the missions more. My comment about the Law of Averages is that we can only count on it with a very large sample. In a short run, it's very easy to hit the same mission in the top 25% two or three times in a row, especially when we include weighted event category selectivity and we hit a couple of recons/harvests in mid-late game. --Wanderer 23:05, 14 May 2007 (CEST)

It's going to be pretty impossible to come up with a unique event for every single entry in the event table anyway, so as long as the nulls get hit at a satisfactory rate, I'm not too worried about the chance that the same event might be selected a couple of times in a row. The important thing to me is that they won't necessarily get selected twice. So providing the event tables are sane, I foresee no major problems. --BTAxis 23:45, 14 May 2007 (CEST)

When a base attack is spawned, the UFO or UFO group should fly to a base that is randomly picked, the selection being modified by the bases' weights. A base's weight is a function of how well-known that base is to the aliens (the base will make itself more known the more it attacks nearby UFOs) and the degree of alien infiltration and/or XVI infection of the area the base is located in. --BTAxis 16:10, 27 July 2007 (CEST)

The following is the beginning of an attempt to prevent too many UFOs from spawning and getting the balance a bit better.

1. Our current setup seems to increase the number of UFOs during the campaign according to a specific plot equation. Y-axis controls the likelihood of a mission spawning (roughly) and X-axis controls alien interest (consider it the progression of time).

The main problem with this is that there is no way to properly balance the number of UFOs in a given period of time if we rely only on this equation. No matter what we decide is the right UFOs-per-month balance, the game will always progress from not enough to too many. The equation used is important for the early game, where we want to ease the player in with fewer missions, and the late game, where we want to overwhelm the player. But the majority of the campaign should take place in some kind of sweet spot where there are not too many missions to overwhelm the player. The game should become more difficult during this period not because of an increase in UFOs, but because of an increase in the weaponry/number of aliens that each UFO carries.

This is just a preliminary comment. I am still looking into other aspects of the system to find good numbers, but I wanted to get comments from the devs about this structural change. Would we agree that the mid-game needs to occur with about the same number of UFOs per month? --H-hour 23:33, 6 January 2012 (CET)

I haven't played campaign for 2 years, so I don't feel too competent as far as balancing goes. But as all formulas seem to rely on interest level, we should start with a complete list of all the things that interest level has an effect on imho. Secondly, we need a list of everything that can not be achieved with a simple formula like "0.5 ufos per day. In other words: let's collect the requirements before talking about the implementation.--Duke 04:26, 7 January 2012 (CET)

I feel that a simple formula for number of UFOs could work in the mid-game. But here is a list of things that we need that complicates it:

We do face one problem with using the saves data: there doesn't appear to be any historical data on increase of alien interest levels. So I can pull out how many UFOs are being spotted throughout the course of the game, but I can't match that to specific alien interest levels --H-hour 10:55, 7 January 2012 (CET) 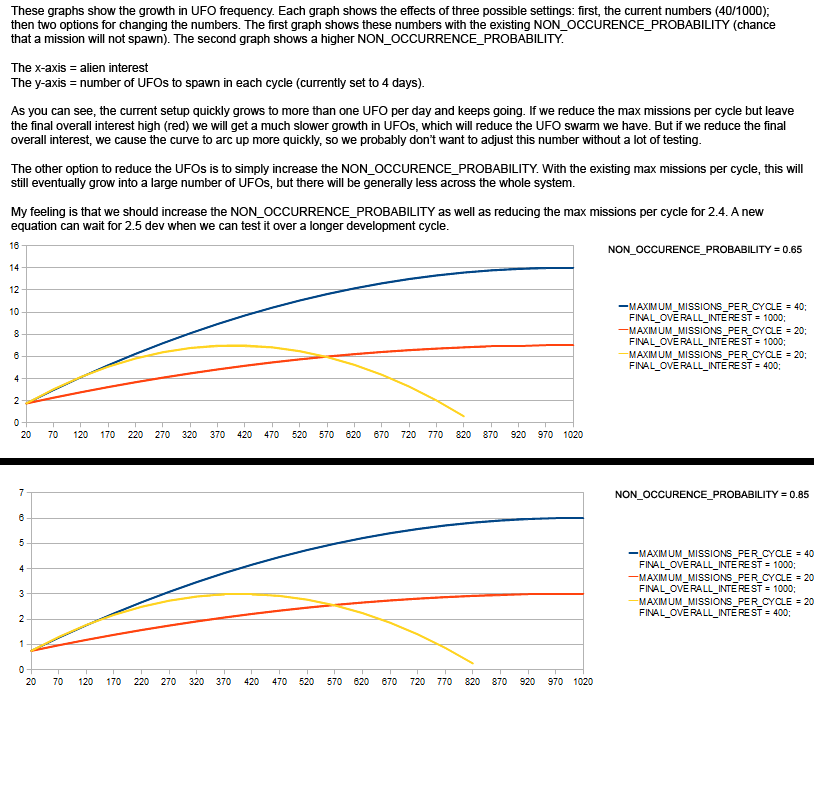 Overall alien interest is set to increase once every 18-22 hours depending on game difficulty. On a very hard game save near the end of the current campaign (226 days) the total interest was only 319. Our current max alien interest is set to 1000. I think there is a problem here. It should be set lower, or research progress needs to happen more slowly. This is complicated by the fact that an alien base ends the game at the moment, so the campaign might progress farther at some point. But this number can be adjusted then.

If the save data is correct about the alien interest, then equipment_missions.ufo needs to be adjusted as well because many of the advanced equipment sets only occur at interest levels above 400.

Also, if we reduce max alien interest, we will want to reduce the number 50 in line 268 of cp_missions.c. At 400 interest it will create only 7-9 aliens:

I've had a look through the code for generating UFOs, and increasing/decreasing nation happiness, and here are my suggestions. These suggestions are designed to address the worst problems (too many UFOs, nation unhappiness early in game) with a minimal solution to reduce the risk of seriously upsetting game balance for the 2.4 release.

1. Increase the cycle for mission spawning from 4 days to 8.

2. Reduce the maximum possible missions per cycle from 40 to 25.

The above two changes will drastically reduce the number of UFOs. Here's how I think they will effect other aspects of the game:

Currently, the only things negatively effecting nation happiness are missions the player does not attack or completely fails (also UFO sales, see below). As a result, the high number of UFOs was making it very difficult for players who do not expand quickly enough. UFOs were showing up in unseen areas causing nation happiness to drop early in the game (<-- my hypothesis). Reducing the number of UFOs should slow down nations getting angry early in the game.

By reducing the number of UFOs, the player will have fewer to sell to nations. This should not effect things too much. The current code suggests that selling to one nation just angers others, so selling UFOs actually works (in aggregate) a negative effect on nation happiness:

If I understand this correctly, selling a UFO increases one nation's happiness 0.02 and decreases the other seven nation's happiness by 0.005, leading to an aggregate happiness effect of -0.015. At first I thought this was a mistake, but it might actually work well, because the player can channel the effect to those nations it is unable to effectively defend. Those it can defend will be happy enough because of the positive results of missions. This aggregate negative effect from something that seems like it should give a positive effect may actually cleverly balance the game mechanic.

There is a separate problem with mission performance/nation happiness, but that needs a separate solution.

Players are likely to have less money because they have fewer UFOs to sell. As a result, the research/production will probably be slowed down a bit in relation to game time. But because the player will face fewer UFOs over that period of time, it will feel like the game is progressing more quickly. This means that the player may have less research completed by the time certain alien interest levels are achieved, but my guess is that this won't put the player in a very bad position. All indications from player's comments suggests the game gets pretty easy in the mid-to-late game, where this effect will be strongest.

The player will face fewer UFOs between intervals where it receives additional soldiers/scientists/workers. This could mean that the player has more available employees than they need. But since this risks making one aspect of the game easier rather than more difficult, I think it is okay to leave as-is for 2.4 and adjust for 2.5 based on feedback.