This TODO may be out of date as the UI code has changed but UI2 has not necessarily been updated. An audit will need to occur to get UI2 in working order first.

Full TODO information appears at the top of each .ufo file in /mods/ui2.

Many (but not all) components appear in the _assets* files.

Note: Base window also includes building construction and alien containment functions within it. 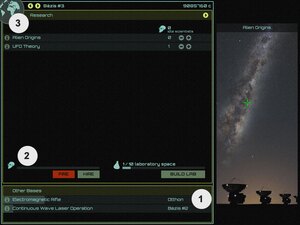 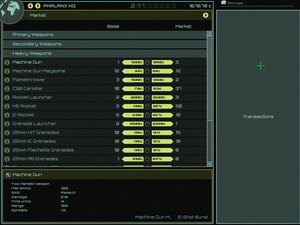 Geever is creating a shopping basket function for the market. Work is just beginning on this window.

Haven't figured out what I want to do with this yet. May keep market similarities, may try to find a new layout scheme.

No concept work done. Considering not using this window. I have put building capacities under the facilities tab on main base window, and will also add the baselayout panel for easy switching between bases.

No concept work done. Will depend on whether or not we can split equipping to the new soldiers window.

Entirely new soldiers window needed, since we're getting rid of employees window. I would love to finally separate equipping from the aircraft window and put it into the soldiers window, if that's possible. But either way I expect this window will come at end of dev cycle.

Things to do when finished