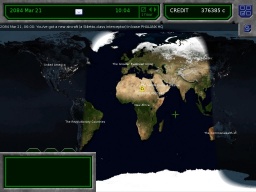 The geoscape with one (the first) base.

Welcome to Geoscape! As said before UFO:AI distincts between two major aspects of the game - macromanagement and tactical combat. To put it simple one could say: Combat is where you earn the bucks (besides honor of cause ... ), Geoscape is where you spend em.

Geoscape itself basically consist of two screens. The first one is the world map. This is where you get in right after starting a new campaign and it is used to get the bigger picture as well as coordinating combat missions and intercepting enemy UFOs. Second is the base overview, where you improve infrastructures and order important decisions about equipment, research and production. In the following we will take a closer look at both of them.

Taking the following screenshot we will have a look at what we might want to use the world map for. Please take notice of the fact that it is divided into day and night zones which actually influence any combat mission you get into (the day/night borderline changes its shape according to the seasons as the relation earth to sun changes).

Here some general information(e.g. stats, descriptions) show up depending on the context. What is shown in detail will be explaint in the following.

If you hover over those registers three different buttons will show up. While the very left one leads to some more detailed statistics about your attempt to save the world. Besides some more general information (like mission won/lost etc.) you can also find out about the attitude of all the UN countries paying you. Please be aware that if you fail to protect particular countries from alien invasions (maybe because your infrastructure are not well established in that region they will cut your resources (financial and employees)

Ufopedia is a comprehensive collection of useful information about items, technologies, damage types and others. As your research proceeds Ufopedia grows as well, so make sure you check the latest news on your enemy's every now and then.

Finally the right button gives you the chance to establish a new base anywhere (besides water) on the map. A new base, once you installed the required structures, gives additional radar-range, research and production capacities as well as new hangars for your aircraft and is completely equal (also in administration) to your first base.

Gives you the current date, so you know when its close to pay day. Please keep in mind that for mankind time is kind of running up. While you, in principle, have unlimited time at your hand, in fact aliens get stronger and better equipped as the game proceeds and you will have to catch up with them in order to beat them and save your beloved homeworld.

Well, as your location isn't nailed down to one certain base this is just to illustrate how fast time proceeds. See also next paragraph.

This is where you can adjust the gamespeed from 5secs (which is in fact pausing the game) over 5Min's up 1day steps. Whatever you put here, while you are in combat time is stoped and it will be all the same when you return from the field of honor.

Should be quite self-explaining. Never forget, you can't spend what you don't have.

Gets you to the Options-menu where you can load and save your game as well as start a new one. Through "exit" you reach the main menu where you can change game settings and continue your current game (via singleplayer $\rightarrow$ continue)

There are two icons on the geoscape that will provide you with an interface for important messages.

Currently they are roughly seperated into ticker-news (also called simple 'messages') and mails.

Read Messages for more info on that.

Those yellow houses represent your bases. Circles around them (popping up later in the game) represent their radars range. If you want to "enter" a base just click on its symbol.

These are the ones that get your squad to the action. Clicking on it once brings up some general data about it (like fuel, speed, status and amount assigned soldiers) to the status screen.

A second click while it's selected opens a submenu where you may give/change orders, e.g. sending it back home.

Those fast ships job is to take enemy UFOs down. If it catches up with one the dogfight is going to be calculated based on both ships equipment and the result shown on screen. Just like one paragraph before a single click selects the interceptor (a further click to a certain spot on the map will order it to move it there) printing some general information in the status window. A second click while it is selected brings up a window where you might give more advanced orders to your ship.

This is where the action waits. Selecting a mission will give you a short description on the status screen while a second one makes you select a ship to bring in the troops you want.